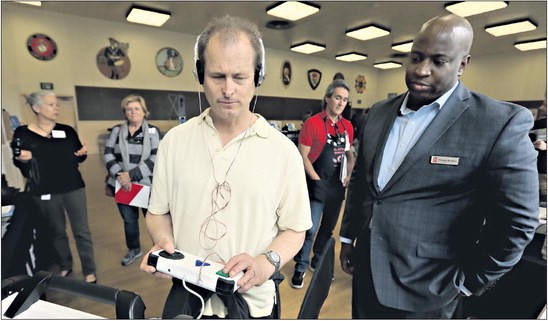 Sonoma County voters will likely see a new ballot format and new equipment at the polls beginning next year, including computer touch-screens, officials said Thursday during a preview of the latest technology for implementing democracy’s bedrock process.

“I’m checking it out,” Sonoma County Administrator Sheryl Bratton said. “It’s time to invest in the new technology and a reliable system.”

County elections officials say the current system, called Mark-A-Vote, is still “functional and accurate” but 35 years old, uses parts no longer made and runs on software no longer supported.

County Clerk Bill Rousseau, whose term expires this year, said he had been determined to modernize county elections since he took office in 2012.

A new system could cost about $6 million, he said, less if the county opts for a multiyear lease that allows it to scale back the number of polling places in the future.

Rousseau said the county is considering a move to an all-mail election, possibly in 2022, with ballots going out to all voters with just 30 “vote centers” around the county.

Five counties are using such a system this year, and Rousseau said “we’re going to learn from them.” There will be about 200 polling places for the June 5 primary election and vote-by-mail ballots will be sent out

Following Sonoma County COVID-19 safety guidelines, our campus is open. Masks are not required indoors if you are vaccinated. Thank you!